Most Dangerous Highways in Arizona 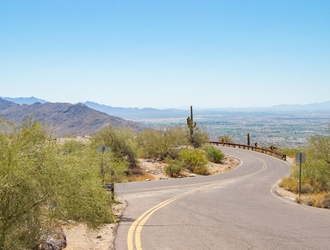 More than 7 million people reside in Arizona, and tens of millions more visit the state every year, according to the Arizona Office of Tourism. With so many residents and visitors on Arizona’s roads and highways, hundreds of people are killed, and thousands more are injured in traffic accidents each year.

When looking at the crash statistics, it is clear that some highways are more dangerous than others. Below, we discuss the most dangerous roads in Arizona to hopefully keep you and your family safe. When driving on these highways, please take extra care and caution.

Stretching from Flagstaff in northern Arizona south toward Phoenix are 145 miles of Arizona’s Interstate 17. This highway gains more than a mile in elevation as it extends north toward the Grand Canyon. Unfortunately, in addition to I-17’s acres of spectacular scenery, there’s no shortage of serious road hazards.

The ends of I-17 reach densely-populated areas, which means traffic congestion and accidents are common. In certain spots, extreme elevation changes also contribute to icy, snowy, and foggy conditions throughout much of the year. It’s no wonder I-17 has previously been counted among the 100 deadliest highways in America.

Although Interstate 19 covers just 63 miles between Tucson and the U.S. – Mexico border, this short highway is not lacking in dangerous traffic.

Ending in Nogales, I-19 runs straight through some of the most remote portions of the Arizona desert. The flat, open landscapes and relative lack of crash-prevention measures have earned this road an unfortunate reputation for serious traffic collisions.

I-19 was also named one of the 100 deadliest highways in America by The Daily Beast, ranking 38th with 57 crash fatalities in only four years. Shockingly, this works out to a staggering average of nearly one fatal accident per road mile.

Interstate 40 is a major U.S. highway that runs from east to west across the northern half of Arizona, stretching from Topock toward Lupton. This historic 359-mile highway, also known as the Purple Heart Trail, cuts through sections of the Petrified Forest National Park and many other picturesque regions of Arizona.

Today, I-40 is constantly bustling with commercial traffic, making it one of the more dangerous highways in the state. Brush fires in the summer months and ice and snow during the winter frequently worsen road conditions.

Nearly 400 miles of I-10 pass through Arizona. The highway runs east across the Colorado River near Ehrenburg before turning southeast from Phoenix to Tucson and east toward the New Mexico border.

Heavy commuter traffic is expected throughout this portion of I-10 in Arizona, especially on the 150-mile stretch between Phoenix and Tucson. Many areas of the highway have no guardrails or center barriers separating opposing traffic lanes, which raises the risk of devastating head-on collisions. Given the recent speed limit increases enacted by the Arizona Department of Transportation (ADOT), it’s no wonder I-10 frequently tops lists of the most dangerous roads in the state.

Although Interstate 15 follows the Virgin River across less than 30 miles of the northwestern corner of Arizona, this short stretch of highway is still home to enough fatal wrecks to rank 52nd among America’s 100 deadliest roads. In just four years, a total of 20 fatal accidents and 23 fatalities occurred on Arizona’s portion of I-15.

Much of the traffic on this highway comes from local and regional visitors to the nearby cities of Las Vegas, San Diego, and Salt Lake City. However, I-15 is also an important segment of the CANAMEX Corridor, which links international traffic from Mexico City to Alberta, Canada.

U.S. Route 93 starts near the Hoover Dam, about 35 miles southwest of Las Vegas, and ends 200 miles away, just northwest of Phoenix. This route was once famous for crossing directly over the Hoover Dam, but it was rerouted more than a decade ago to traverse the Mike O’Callaghan–Pat Tillman Memorial Bridge.

Despite its rich history, U.S. 93 is widely known as one of the most dangerous roads in the country. Drivers in this area are notorious for dangerous speeding and reckless behavior, which undoubtedly contributed to its numerous deadly crashes.

Also known as the Grand Avenue and the Phoenix–Wickenburg Highway, U.S. Route 60 runs through 369 miles of Arizona. U.S. 60 starts at the I-10 junction near Quartzsite and stretches to the New Mexico state line near Springerville.

U.S. 60 winds its way through the Salt River Canyon, making it one of the most scenic drives in the country. But unfortunately, much of the path through the canyon is dangerously curvy and narrow. Drivers who attempt to blaze through at high speeds are especially likely to contribute to accidents.

State Route 87 is affectionately nicknamed “The Beeline Highway” after the zig-zagging path it takes through northeastern Arizona. This 272-mile highway stretches north from I-10 near Picacho to State Route 264 near Second Mesa.

The endless curves through the canyons of the Mazatzal Mountains make for some stunning views, but the steep paths in the high country can get ugly fast. Drivers who make dangerous passing maneuvers or fail to obey the speed limit often cause deadly accidents on The Beeline.

Much of S.R. 88 is unpaved and rugged, with dangerous drop-offs, blind curves, and few guardrails. Accidents are prevalent at speeds above 15 mph, and drivers of large vehicles such as RVs and campers are discouraged from attempting the route.

State Route 77 crosses most of the state from the I-40 junction north of Holbrook to I-10 in Tucson. Although much of this highway is a pleasant drive through scenic Arizona landscapes, the portion of it that runs through Salt River Canyon can be a harrowing drive.

With many sharp turns and narrow lanes, the Salt River Canyon road is easily one of the more dangerous stretches of highway in the state. When drivers are distracted, impatient, or simply negligent on this road, they can cause serious accidents.

State Route 89A is a relatively short, 23-mile highway that runs from Prescott Valley through Sedona before ending in nearby Flagstaff to the north. The road features a daunting series of switchbacks along a mountainous road, climbing from an elevation of 4,500 feet in Sedona to nearly 7,000 feet near Flagstaff.

S.R. 89A is a popular route for locals, who are commonly frustrated and impatient with the slow speeds of visiting tourists. This can result in reckless drivers who sail past other drivers at unsafe speeds when the opportunity arises, increasing the risk of accidents for everyone.

As you drive through the Santa Catalina Mountain Range along the 27-mile stretch of the Catalina Highway, the view slowly fades from the harsh desert of Tucson to lush alpine forests. As the only paved road with access to the popular Mount Lemmon, this highway is often described as a congested and stressful drive.

Catalina Highway, also known as General Hitchcock Highway and the Mount Lemmon Highway, is often open to visitors year-round. The mountain roads tend to be especially dangerous and accident-prone during the icy and snowy winter season.

With an estimated 460 curves, The Coronado Trail Scenic Byway is a winding segment of U.S. Route 191 connecting Springerville to Clifton.

The highest point of The Coronado Trail reaches 9,383 feet above sea level, making it one of the highest mountain passes in the state. And with many frighteningly narrow segments, there’s little room for error on this dangerous highway.

Although the Coronado Trail’s dangerous hairpin curves are typically closed after heavy snowfall in winter, keep in mind that it can be just as risky in the summer.

Sitgreaves Pass is another hazardous mountain road that follows Old Route 66 from Oatman to Walnut Creek. In addition to being narrow and curvy, many parts of this road are in relatively poor condition.

Although the pass itself is only 22 miles long, it’s high up in the Black Mountains, with gradients as high as 12 percent on some stretches. Given the many blind switchbacks, sparse guardrails, and steep drop-offs, it’s best to avoid taking this dangerous road at night or in bad weather.

Hurt in a Crash on a Dangerous Road in Arizona? Let Us Help

Have you been injured in an Arizona car accident? You could be entitled to money for your losses. Contact the car crash attorneys of Swenson & Shelley to learn more about your options in a free initial consultation. Our lawyers are committed to the relentless pursuit of justice for accident victims.TM

Kevin Swenson was raised in Bountiful, Utah, and is a co-founding partner of Swenson & Shelley. After graduating from Bountiful High School, Kevin attended business school at Westminster College.